Skip to main content
Office for Diversity, Equity, and Inclusion 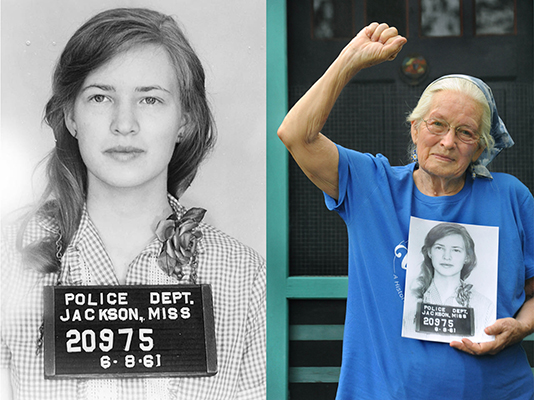 Join us for a film screening of “An Ordinary Hero” and conversation with Joan Trumpauer Mulholland moderated by Professor Emerita Patrice Grimes with special guest Deanna R. Reed, Mayor of the City of Harrisonburg, Vice President of Charlottesville Alumnae Chapter of Delta Sigma Theta Sorority Incorporated and co-chair of the social Action Committee.

Her Freedom Rider mugshot has been called one of the most iconic in American history. By the time she was 23 years old, Joan Trumpauer Mulholland participated in over 50 sit-ins and demonstrations including the Freedom Rides, the Jackson Woolworth’s Sit-in, the March on Washington, the Meredith March and the Selma to Montgomery March. Her path has crossed with some of the biggest names in the Civil Rights Movement: Martin Luther King, Medgar Evers, Fannie Lou Hamer, John Lewis, Diane Nash and Julian Bond to name a few.

She has appeared in several books including “Coming of Age in Mississippi”, “Breach of Peace”, “We Shall Not Be Moved”, and, “She Stood For Freedom”. She has appeared on television and news programs like the “CBS Nightly News” and award-winning documentaries including “An Ordinary Hero”, PBS’s “Freedom Riders”, “Standing on My Sister’s Shoulders” and the groundbreaking film “Eyes on the Prize”.

We are excited to have the opportunity to have a conversation with Joan Trumpauer Mulholland following a screening of the film “An Ordinary Hero” and to discuss her lifetime of action for civil rights, racial equity, and social justice. You can learn more about her ongoing work educating the next generation of civil rights leaders through the Joan Trumpauer Mulholland Foundation.

This event is the culmination of ideas and work from the Independent Study of Graduate Student and Cuffee Mayo Descendant, Ellicia Chau. Funding for this event has been provided by the UVA Office of Graduate and Postdoctoral Diversity Programs and the Division for Diversity, Equity, and Inclusion.